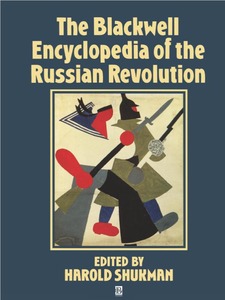 The Blackwell Encyclopedia of the Russian Revolution

This single volume is an authoritative and accessible guide to the background and progress of the Revolution, written by a team of over 40 specialist contributors. Beginning with the radical movements of the mid-nineteenth century, the Encyclopedia covers the development of the revolutionary movement created by the intelligentsia; the condition of the peasants, that of the working class, and of the army; the role of the Tsarist secret police; the 'agents provocateurs' ; and the revolutionaries' own underground. A substantial section is devoted to the emergence of liberation movements among the national minorities of the borderlands. The Encyclopedia also considers the formation of Soviet institutions, and examines too the emergence of revolutionary culture well before 1917, the avant-garde in art and theatre, and the relationship to the revolution of three major Russian writers: Blok, Gorky and Mayakovsky.